The weather was great as I led my students from Midreshet Emunah v'Omanut on a hike from Tzomet Ora to Ein Kerem today.  We took Egged (public transport) bus number 19 to the Tzomet Ora stop and that is where we began our trip. 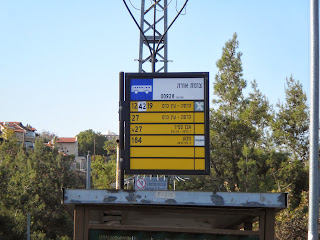 We followed a winding dirt road, and within a few turns, the beautiful view opened before us. 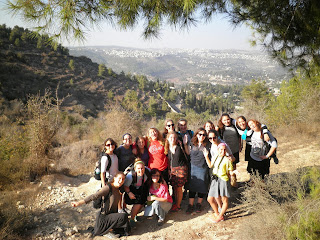 While the hike was not too hard, we encountered a few spots that challenged us, giving our trek an added element of excitement.  The whole hike took us about an hour and a quarter, including a 20 minute sketching stop in the middle of the forest.

The path came to end on Rechov HaMaayan in Ein Kerem.  We made a brief stop at Mary's Spring to learn about the historical significance of Ein Kerem to both Jews and Christians before breaking up into smaller groups to explore the many small lanes filled with art galleries and interested buildings. 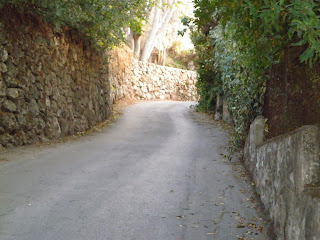 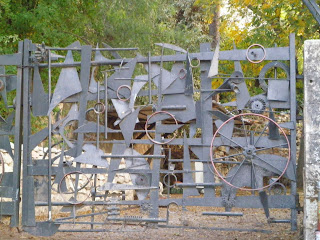 As the sun set, we regrouped at the spring to share our coolest find, and finish a conversation we began last week about the ethics of the tactics used by the Jews against British in pre-state Israel.

On our way up to Rechov Ein Kerem to meet the bus, we got a glimpse of some of the religious sites that make Ein Kerem a popular tourist stop.  With  time to enjoy nature, art, and have some great philosophical conversation, it could not have been a better Monday afternoon.

Rivi Frankel is a Tour Guide based in Jerusalem, Israel. She is currently the Program Coordinator at Midreshet Emunah v'Omanut and the Director of Yesh!Israel, a project designed to help everyone get the most out of their Israel experience, no matter what the budget. For more information check it out on Facebook facebook.com/yeshisrael or email Rivi at israelwithrivi@gmail.com